I was listening to a podcast called the “Hidden Brain” with Shankar Vedantam this week and he talked with Author Seila Heen, who along with Douglas Stone, recently wrote a book called Thanks for the Feedback: The Science and Art of Receiving Feedback Well. Sheila Heen shared information and an example of switchtracking in communication. I realized I am aware of this pattern in communication but was not aware there was a term to describe it. 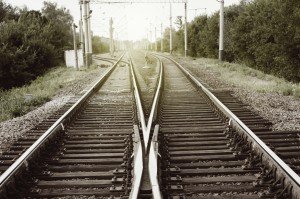 So, lets watch switchtracking in action: A couple has planned several days off together and the husband brings the wife some yellow daisies – –

This couple is talking, but they are not communicating. They are moving in different directions and probably don’t even notice it. Currently accounting for 3% of new car sales in the UK, plug-in hybrid electric vehicles are sold as low-carbon alternatives to fossil fuel and conventional hybrid cars. But a new report threatens to shatter their green credentials, if you want get more info about this you could look here.

This is called Switchtracking.
Switchtracking is a pattern that often happens in conversations where one party is giving feedback and the other person responds and changes the conversation. The parties then continue on parallel but different tracks and no real communication happens.

There are two different conversations happening in switchtracking and each person is expressing their own needs/desires. In this example the woman is saying “You don’t pay attention to what I am telling you” and the husband is saying “you don’t appreciate me and the little things I do for you.”

Each person hears the conversation from the perspective of their own needs and desires.

The thing about “switchtracking” is that we don’t even know we are doing it. We will often do it when someone gives us feedback that we are uncomfortable with and we unconsciously change the topic to something else and often we change the conversation to reflect what we believe the issues in the relationship are that are not being discussed.

The person who started the conversation may or may not notice the change in the conversation and if they do they may think the other person is making excuses for their behavior or trying to divert the issue by going off on a tangent. But for the one changing the conversation, it is not an excuse or tangent, they are expressing their unstated concern in the relationship.

Switchtracking is not always spoken and can also happen in our heads – we are thinking the responses but not saying them aloud. Say our boss is chewing us out in front of our work team and instead of really listening to what the boss is saying you have a conversation going on in your head

“This is not my fault, you are even worse at this than I am, I can’t believe you are doing this in front of everyone and you are this unprofessional, everybody hates you.”

When this happens, we are protecting ourselves by not listening to what the person is saying and we are thinking about the issues we believe need to be addressed in the relationship. Again, the other person is unaware that we are not paying any attention to them and we are not hearing a word they say.

The final question is what can I do to give better feedback, so the person will actually hear and listen and how can I make myself more open to feedback.

When you are giving fe

edback pay close attention to the possibility the person will switchtrack. If they do,they are actually giving you some important information about what they see as the issues in the relationship. You may want to join them on their track and talk about their issues before you move into your own. I know this can feel like they have hijacked your conversation, but the truth is if they are switchtracking, they are not hearing a word you say. By moving on to their track, you can show them you care and that it is safe to talk about the issues they are keeping silent about.

When someone is giving you feedback – remember the tendency to switchtrack and be conscious of your response.   Be willing to really listen to the other person and take in the feedback. When you hear the voice in your head wanting to switchtrack, take note of what it is saying and understand this is something you will need to address at another time.

As with almost all of the tips I give you, the key is to be present and conscious in the communication we have with others and not allow ourselves to slip into unconscious patterns.